The Origins of the Twelve Steps

The Twelve-Step philosophy of Alcoholics Anonymous (AA) is an integration of the early medical model of alcoholism, basic Christian principles, philosophy and psychology. Bill Wilson, co-founder of AA, who in collaboration with the early members of the fellowship wrote the Twelve Steps and the book ‘Alcoholics Anonymous’ (aka the Big Book, first published in 1939), was influenced by these disciplines and certain individuals.

The origin of AA’s concept of recovery from alcoholism by means of a “spiritual experience” can be said to have begun with the famous Swiss psychiatrist Dr Carl Gustav Jung. Jung suggested to one of his patients, Rowland Hazard, that the only solution to his hopeless condition was a spiritual or religious conversion experience. Rowland Hazard then sought out this experience in the non-denominational Christian Oxford Group. He then passed this message onto Ebby Thatcher who was a drinking friend of Bill Wilson.

The Oxford Group placed emphasis upon the spiritual principles of surrendering, self-survey, admission of faults, making amends, asking God for guidance and witnessing. Wilson adapted these tenets and added Steps 1, 2, 6, 7 and 10. This is how the Twelve Steps came into being as the method of change required in order to bring about the solution to the problem of alcoholism. Wilson had gained an understanding of the ‘problem’ while being treated for alcoholism in hospital.

While in the Towns Hospital in New York, Bill Wilson received his understanding of alcoholism as an illness of the mind and body from his physician Dr William Silkworth. The early medical model of alcoholism suggested a mental obsession combined with a physical sensitivity/allergy. The medical view of the time considered advanced alcoholic addiction to be a pathological craving condemning the sufferer to death. In the ‘Doctor’s Opinion’ at the beginning of the Big Book, Silkworth suggests that the only hope for the chronic alcoholic is an ‘entire psychic change.’

The Pragmatic and Pluralist Influence of William James

The liberal and pragmatic principles of AA were strongly influenced by the American philosopher and psychologist William James. James’s book ‘The Varieties of Religious Experience’ had a profound effect upon Bill Wilson while he was in the Towns Hospital. The book is a study of the diversity of ways individuals experience the spiritual, divine or God. 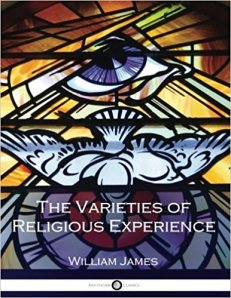 William James was known for developing the ‘philosophy of pragmatism’, which suggests that in matters of faith, rather than fact, it’s how helpful the belief is to the individual that’s important. In AA it is often paraphrased as “what works for you”. In the ‘Twelve Steps & Twelve Traditions’, Wilson states that:

“Alcoholics Anonymous does not demand that you believe anything. All of its 12 Steps are but suggestions.”

AA is truly against dogmatism and only requires an open minded attitude; hence the freedom to choose a God or ‘Higher Power’ of one’s own understanding. Individuals of an atheist, agnostic, or humanist persuasion, often use the AA group and the Steps as a collective ‘Power Greater’ than themselves, which can help bring about psychological and behavioural change.

I would also like to suggest that American society, in which Bill Wilson and AA originated, had a strong influence upon the liberal principles within AA philosophy and its ‘traditions’. American society was the first major modern liberal democracy; with public matters being based upon liberal, humanistic values, and religious belief being a private matter.

Many of the early members of AA were agnostic or atheist. Wilson himself had walked away from his Christian upbringing throughout his drinking career, only renewing his belief in God when he became sober and involved with the Oxford Group. The founding members of AA had to make compromises between those who were religiously minded, and those members who were agnostic or atheist. The desire for an inclusive fellowship and program of recovery led to the suggestions of a “Power Greater” and “God as we understood Him” contained in the Steps. Tradition Three also states that: “The only requirement for AA membership is a desire to stop drinking.” Members are welcomed regardless of faith, gender or any other differences. 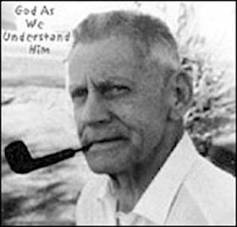 The variety of beliefs within AA necessitates the importance in the fellowship placed upon the liberal values of tolerance and acceptance of difference. The primary purpose of helping each other to recover from alcoholism being the main focus of the AA group, and is what binds those differences together. The AA historian Ernest Kurtz referred to this principle as “joyous pluralism”, in his book, ‘Not-God, A History of Alcoholics Anonymous’.  (P. 151, Hazelden Press, 1979)

It is worth mentioning at this point that several empirical research studies between 2002-2007, have shown that positive drinking outcomes are achieved due participation in AA, regardless of religious or spiritual belief. Tonigan, Miller and Schermer’s (2002) study of atheists and agnostics in AA, demonstrated that AA attendance was strongly correlated with greater abstinence, regardless of God belief. Research has not been fully conclusive in regard to the relationship of spiritual beliefs in AA and outcomes, and more research is necessary.

The Twelve Steps of AA can be viewed as a set of principles and actions, to be practiced in order to bring about positive changes in one’s thinking, behaviour, and moral or spiritual awareness. These guiding principles, if practiced over time, have been found by AA members to facilitate deep inner changes and awareness sufficient to recover from alcoholism and live a more satisfying life.

The Twelve Steps can be understood from a humanistic perspective, i.e through the prism of reason, experience, and shared human values, without the necessity of a belief in God. AA is a diverse fellowship, built upon liberal, as well as spiritual principles, which has from its inception always included members of different world views; including agnostics, atheists and humanists. A ‘Power Greater’ can be understood in terms of the collective power and inspiration of the fellowship, and the wisdom, love and spirit of humanity within its members.

The Steps are often referred to in AA as a ‘way of life’ (to be practiced), and spirituality as a ‘way of being’; which both accord with ‘virtue ethics’ (Aristotle’s moral philosophy), which values the way one is, one’s character or way of being, and the way one lives overall. I believe that the example of virtue (moral character traits) in others, the understanding and practice of it, can bring about ethical and spiritual change and growth within the individual.

Understanding the Twelve Step program of AA from this perspective, and using the liberal principle of freedom to choose one’s own concept in relation to God or a ‘Higher Power’, enables a more humanistic, or broadly spiritual interpretation of the Steps.

“Having had a spiritual awakening as the result of these steps, we tried to carry this message to alcoholics, and to practise these principles in all our affairs.”

The following description of AA’s Step Twelve is based mainly upon my own personal experience of practicing Twelve Step recovery over a period of years.

The result of practicing the Twelve Steps and the principles contained within them, consistently over time, is that the alcoholic will have changed in their outlook, attitudes and behavior enough to be free of their active addiction and its mental obsession.

In general, they will be content to live a sober way of life and be willing to help others to do the same. The nature of the ‘spiritual awakening’ or ‘personality change’ is unique to the individual and can happen as an event, or more commonly over time as a self-actualizing process.

For me, indications of a spiritual awakening are a freedom from the obsession to drink and also include: a sense of being transformed or changed in outlook and consciousness; a greater awareness of moral/spiritual values; a willingness to practice love and be of service to others; development of honesty and humility; and an increased sense of relationship or connection with oneself, others and the world.

These changes in awareness and ‘way of being’ cannot be willed to happen, but come about as the result of participation in the Fellowship of Alcoholics Anonymous and its Twelve Step program of recovery.

“We tried to carry this message to alcoholics, and to practice these principles in all our affairs”…. is practicing the virtue of altruism or unconditional love in relation to other alcoholics, and being a living example of the principles contained within the Twelve Steps.

By “living example” I mean practicing the Twelve Steps and principles contained within them on a daily basis, in all situations, and with all people. It’s living the program and is how one develops emotional, moral and spiritual maturity.

In co-founder of AA, Dr Bob’s opinion, “love and service” to others are the main characteristics of the Twelve Step program; a giving to others without expectation of reward. The message we carry is one of recovery through the Steps by our example and the actions we take in helping others to do the same.

“Our Twelve Steps, when simmered down to the last, resolve themselves into the words “love” and “service.”

Helping other alcoholics to recover through practicing Step Twelve can be done in various ways eg., by sharing in meetings and by carrying out the numerous service roles of the fellowship.

Though the practice of Step Twelve shouldn’t include expectation of reward, in my experience the practice of sponsorship is the most rewarding form of carrying a message of recovery to others.

There is a mutuality in giving, or love and service towards others, and I’ve certainly gained from my giving in sponsorship. Helping others to stay sober and to practice the Twelve Steps in their daily lives strengthens me in my own recovery. It helps me to develop my character and my practice of the program; and to evolve my emotional sobriety and spiritual awareness.

To paraphrase Marya Hornbacher…  ‘I can be a source of spiritual comfort and strength towards others and in doing so be comforted and strengthened myself.’

“…what comforts me is comforting someone else when I can; what gives me strength is giving strength to another; and when I need, I try to give. I return to the prayer of St Francis: “…Grant that I may seek rather to comfort than to be comforted; to understand than to be understood; to love than to be loved. For it is by self-forgetting that one finds.” (1)

This primary ethos of love and service to others carried through Step Twelve, and the reciprocal nature of fellowship, is at the core of Twelve Step recovery and is the driving force of my spiritual growth and awakening.

“When, therefore, we speak to you of God, we mean your own conception of God. This applies, too, to other spiritual expressions which you find in this book. Do not let any prejudice you may have against spiritual terms deter you from honestly asking yourself what they mean to you.”

“The wording was, of course, quite optional, so long as we voiced the ideas without reservation.”

Agnostic Version of the Twelve Steps

When told that some Buddhists wanted to start AA groups in Thailand but wished to change the word “God” in the Steps to “good”, Bill wrote:

“To some of us, the idea of substituting “good” for “God” in the Twelve Steps will seem like a watering down of AA’s message. We must remember that AA’s Steps are suggestions only. A belief in them as they stand is not at all a requirement for membership among us. This liberty has made AA available to thousands who never would have tried at all, had we insisted on the Twelve Steps just as written.”